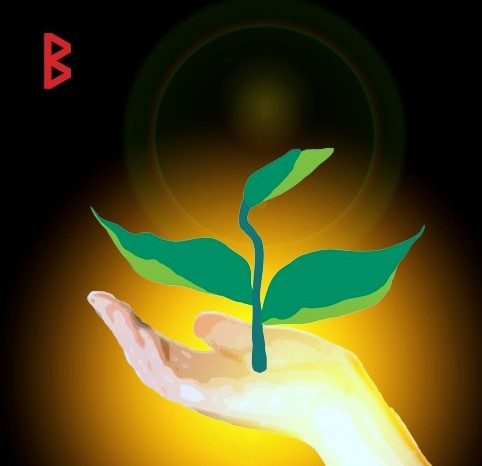 This rune is a fertility symbol, drawn to resemble a woman’s breasts.  In ancient Viking times, the birch was regarded as the tree of fertility and the act of being lightly whipped with birch twigs was supposed to promulgate vigor and vitality!  The people of Scandinavia still hold this belief; after a sauna people are encouraged to roll around in the snow and then made to endure a lashing with a bundle of birch twigs. The Phallic maypole that was traditionally danced around, heralding in Spring and new life, was usually made from birch. The appearance of Berkana in a reading clearly points toward inception; whether of a child, a project or perhaps a new idea.

Berkana is rather auspicious. Yet  because it represents the mother, and by implication the child, there is an element of “nourishment” associated with it.  Even if the rune is essentially beneficial the new project will need the same kind of feeding or succour as an infant would. Success will not come on its own without some nurturing; effort and attention will be required.  This may explain the duality associated with the birch tree, the “fruitless tree,” implying that all is not as it seems and that success will be achieved only through authentic and genuine application.

Reversed, Berkana becomes a symbol of sterility, implying difficulties and miscommunication, especially on the domestic front. Perhaps a desired pregnancy will prove impossible, or a current pregnancy be terminated. Alternatively, Berkana can point to worries over children, especially in terms of health. The surrounding runes always point to a clearer picture. A reversed Berkana is not particularly malign of itself and requires more ruthless runes to imply any real trouble, while helpful runes definitely reduce the situation.